Trousers have been on my ‘take make’ list for a while and I had been putting off making them for a while too.  A few weeks ago, I decided to bite the bullet and go for it.  My pattern of choice was the Cigarette Pant pattern from the Gertie Sews Vintage Casual book.

As usual, before making a garment, I tend to research it online to see if there are any fitting issues and tips for construction.  With this pattern, I only managed to find 3 bloggers who had reviewed them – there were a lot of reviews for the Butterick 5895’s, which were designed by Gertie…but these were different form the ones in the book so I didn’t really want to take note of those fitting issues as they were not the same trousers! 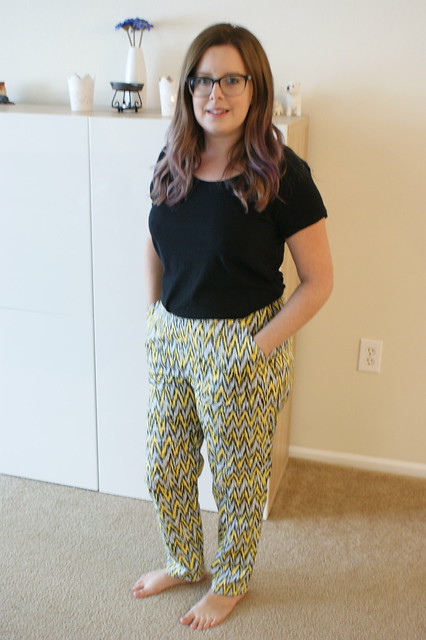 Within the pattern instructions, Gertie actually writes about the model who is wearing the cigarette pants in the picture.  She was petite so Gertie took a small amount of length from the pattern, from above the knee and above the crotch.  As I’m quite small, I decided to do this also.  I traced the size 8 but graded out to a 10 on the hips. 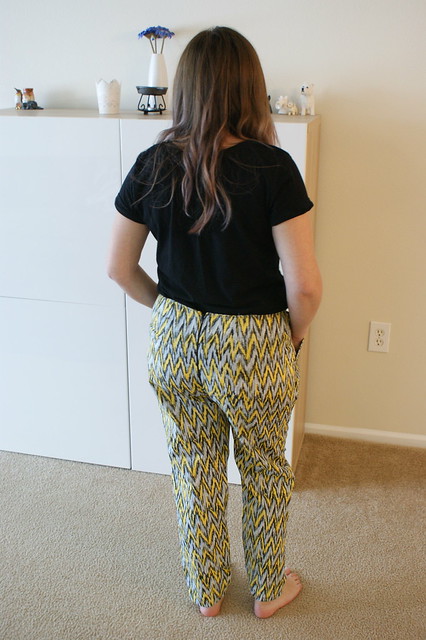 Making the trousers (pants!) was surprisingly quick and straight forward.  My common sense had to take over during the pocket construction as the picture in the book didn’t reflect the actual instruction so I just did what I though was correct – and it worked!  I’m sure the pictured pattern pieces are the wrong way!  The seam allowances were trimmed and overlocked as normal.  I didn’t attach the waist facing until I had tried them on and solved a couple of fitting issues.  From the thigh down, I could have fit both my legs into one leg so I needed to take each leg in quite a bit!  I also found that the back seam was pulling quite a lot where the zip was inserted so I made the hip seam allowance smaller and made the back darts smaller to allow more room for my bum. :-0 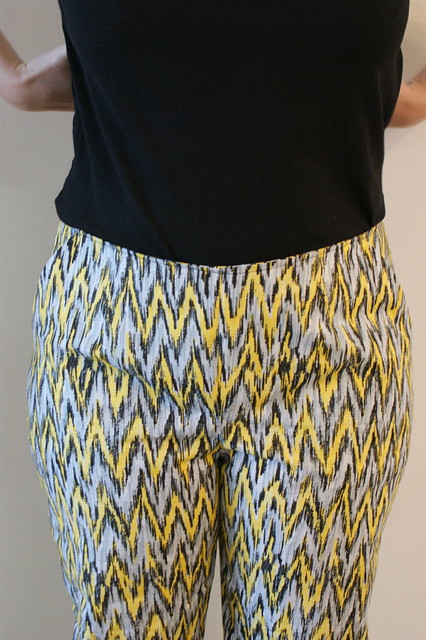 I love jazzy trousers and these are just perfect for me!  The final fit wasn’t perfect but was much better than when they were first sewn up.  These are a little baggy on the front  but are still a little too tight across the back.  I don’t think I could squat quickly in these trousers as they would probably split!  This cotton is just that; cotton with no stretch – something to bear in mind when using stretch fabrics in the future. 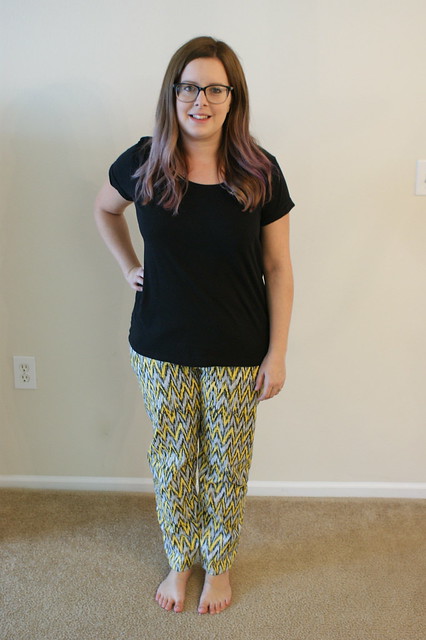 With the initial fitting issues in mind, I altered the paper pattern accordingly.  The book actually gives some great tips for certain fitting issues.  So in addition to changing the leg width & back darts, I also widened the back leg pattern at the hips, cut a ‘wedge’ from the front leg crotch and lowered the gusset slightly. 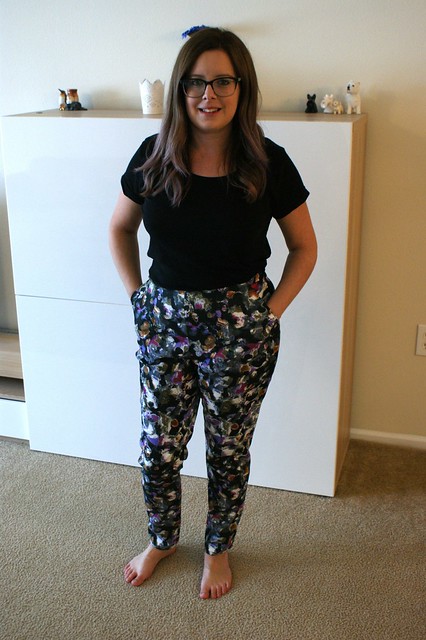 The next material I used was a floral stretch denim.  I made sure to use a slightly larger seam allowance when sewing these to allow for the stretch when wearing.  With this pair, I also moved the zip to the side in the hope that the fit would be better on my bum.  These were constructed in an afternoon ; so quick to say how scared I was of making  trousers pre-constrcution!  Before I attached the facing, I was so pleased with the fit as they seemed 100 times better than the first pair!  I was so happy that I had managed to solve a couple of fitting issues. 🙂 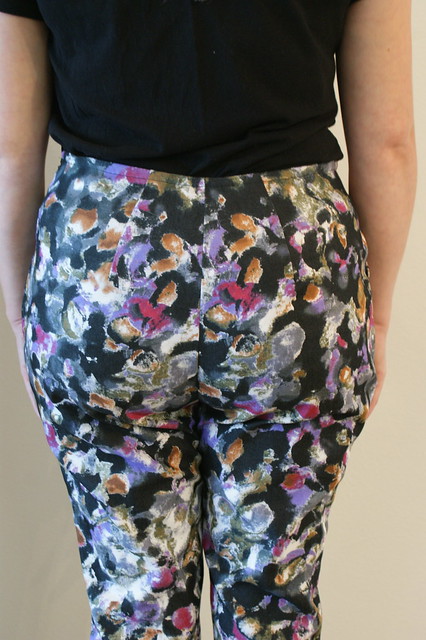 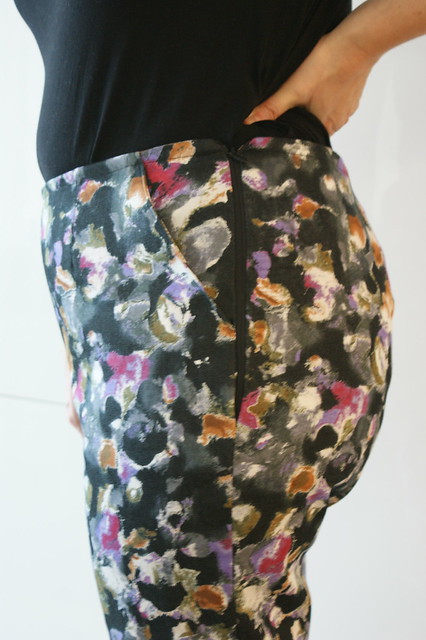 However…I then used the wrong interfacing on the facing piece for the waist. 😦  I didn’t really think about it until I tried them on once they had been completed.  The interfacing I used was the thick type so this eliminated all of the stretch at the waist.  In hindsight, I could have gone without using interfacing at all as the denim was stable enough to start with.  Lesson learnt!  These are now known as my standing up trousers as they are quite tight on my tummy if I sit down. 😀 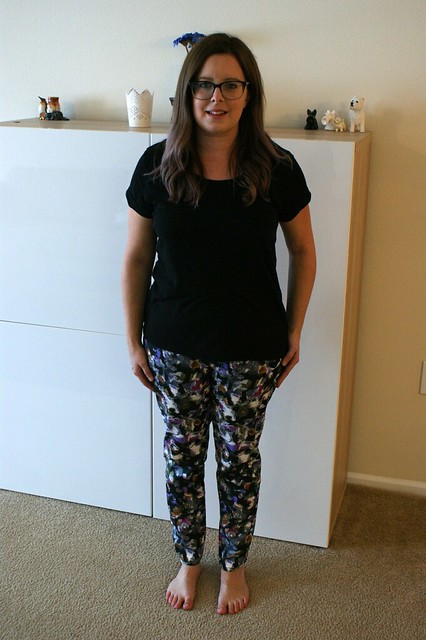 I would love to know if anyone else has tried these Cigarette Pants!  Did you have any fitting issues?  Would you make them again?  Are there any other trouser/pant patterns you can recommend?  I have also got the Ultimate Trouser pattern so I would like to have a go at those ones too!